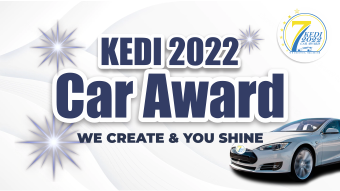 It was all shades of fun, glam and excitement at Landmark Event Centre, Oniru, Lagos where KEDI celebrated the 7th edition of her Car Award Ceremony alongside her 16th Year Anniversary in grand style on Saturday, 15th October, 2022. Having waited for four years since the 6th edition was held due to the restriction placed on mass gatherings as part of the government’s efforts towards combatting the deadly Coronavirus disease at the time.

As a biennial event, the 7th edition of the event themed WE CREATE & YOU SHINE was a double dose of glam as it comprised the celebration of both 2020 and 2022 Car Awardees.

The event which was billed to commence by 11am already had guests seated by 8am in anticipation. Distributors had so much fun at the uniquely decorated Social Media Stand as well as the tastefully decorated Red Carpet where distributors filed in neatly to take pictures with the Managing Director and other members of the Management Team.

After the recitation of both Nigeria and Chinese Anthems, the Managing Director gave his welcome speech where he welcomed all dignitaries, partners, distributors and customers to the great event. He went further to extensively list out some of the Company’s sixteen years achievements and assured the distributors and customers that the Company will continuously strive to provide quality healthcare products and more compensatory packages to enable them enjoy a secured future with their loved ones.

In his speech, the Ashipa Olode of Ibadan Land, Chief Akinyele Oladeji welcomed everyone and commended the management of KEDI for her laudable accomplishments with regards to the continuous provision of quality healthcare products and for consistently empowering millions of people with her lucrative business platform these sixteen years. In closing, he encouraged KEDI distributors and customers to put in their best and continue to support the Company so that more lives can be reached and transformed.

As an organization that respects the culture of all her host communities, the event was spiced up with different cultural dances like the Chinese Lion Dance, the Fan Dance then the WAZOBIA Dance after which it was time to present the awards to deserving distributors.

Unlike the previous six editions, this edition featured thirty different award categories specially designed to recognize and honor distributors for their hard work, commitment and loyalty to the great brand over the years.

In fulfilment of her promises as embedded in the Company’s Compensation Plan, almost three hundred (300) distributors who emerged as winners in the Company’s Car Award Promo were awarded a brand new car of their choice to the amazement of the audience. About Twelve distributors got the Excellent Distributor Award and were given one Customized KEDI Suitcase each in celebration of their tireless efforts towards building their KEDI business.

As a Network Marketing business, teamwork makes the dream work that’s why KEDI management took time to celebrate some teams that have been outstanding over the years. About thirty-three (33) teams were recognized and awarded for their exceptional accomplishments in the business. While the LEADER of the BEST TEAM got a whooping prize of ONE HP LAPTOP, other team leaders got ONE KEDI SUITCASE each.

One of our young and budding distributors was awarded with the Best Networker of the Year Award and he also got ONE HP LAPTOP. About Five (5) distributors were awarded for their aggressive brand promotion and each of them got A BRAND NEW SMARTPHONE.

Indeed, training is essential in Network Marketing and KEDI lecturers are known all over the world for their versatility, professionalism and passion. Hence, it was not out of place that KEDI saw the need to honor her outstanding and rising lecturers nationwide. About forty (40) lecturers got a Public Address System. The Two (2) Most Creative lecturers got ONE HP LAPTOP.

KEDI business is a unique business platform that couples can subscribe to, build together and earn awesome rewards. In KEDI business, thousands of couples are passionately building their future together. To this end, sixteen (16) outstanding couples got ONE KEDI SUITCASE each.

As the first ever Honorary Chairman in the history of KEDI, Chief Sunny Chinedu Ojiaku was celebrated in grand style as the first person to reach the peak of KEDI distributorship status, a laudable achievement indeed. The Managing Director presented him a Special Honorary Award of forty-eight million naira (N48, 000, 000) amidst loud cheers from the audience.

Another jaw-dropping KEDI compensatory package is Villa Award. Entrenched in the Company’s Compensation Plan, KEDI helps her distributors to own houses of their own as part of her efforts geared towards rewarding excellence, hard work and loyalty. This edition, seven (7) distributors were awarded in this category.

In fulfilment of her Corporate Social Responsibility Plan geared towards extending the hands of love to the underprivileged in the country as entrenched in her Five Year Development Plan, the Company magnanimously donated the sum of N500, 000 each to two different homes of the underprivileged situated in Lagos State– Down Syndrome Foundation, Nigeria and Tabitha-Kay Widows Care Foundation respectively.

KEDI’s sixteenth year anniversary was officially celebrated with a grand cake-cutting session. A tastefully-adorned cake beautified in KEDI colours was ushered into the hall in a unique way. The Ashipa Olode of Ibadan land, KEDI Managing Director, KEDI Operations Manager and KEDI’s first Honorary Chairman led the audience to cut the cake as the Company’s sixteen years achievements were celebrated with hearty cheers.

Speaking on behalf of all KEDI distributors, Mr. Adeyinka Adediran and Mr. Adegbemisoye Sam Zion appreciated the management of KEDI for putting the interest of her distributors first and always exceeding their expectations. They further encouraged distributors to stick with KEDI because it is only KEDI that can transform their lives and make all their dreams come true. To members of the audience who are not KEDI distributors, they urged them to embrace KEDI and live a good life.

Distributors could not contain their joy as they expressed their gratitude to the management of KEDI for raising the bars with regards to the event’s quality. Speaking during an after-event interview at the Red Carpet corner, some distributors aired their opinions.

“I have attended six editions of Car Award Ceremony and this is the seventh. I must say that this edition is the best so far. KEDI has raised the bars again”. Mr. Franklin Nsirimobi, one of the Outstanding One Star Director of the Year Awardees affirmed during an interview session at the Red Carpet.

During an exclusive interview at the Red Carpet, the Four Star Director of the Year Awardee, Chief Rich Adiele challenged the distributors to do more, expand their business and take KEDI to different parts of the world because the Company is ready to provide all the necessary supports to help them actualize their dreams.

KEDI Car Award Ceremony is a great event that takes place once every two years with the intent of recognizing and rewarding hardworking distributors for their accomplishments in the business. It is also a medium through which the company celebrates her distinguished distributors for their immense contributions towards the growth of the company and also to encourage them to keep aiming towards accomplishing laudable feats in the business.

The 7th edition of KEDI Car Award Ceremony and 16th Year Anniversary celebration was one of its kind. The grand event affirmed the fact that KEDI is a great company that not just liberate mankind by continuously providing sound health and great wealth but one that exceeds the expectations of her distributors and customers in the prompt fulfilment of promises.

As a reputable health and wealth provider, KEDI is a giant conglomerate established in June 2006 with business interests in the Pharmaceutical sectors in China. Its subsidiaries include KEDI Healthcare Industries Nigeria Limited and Vitanature Healthcare Industries Ghana Limited. KEDI is committed to providing excellent healthcare products and empowering individuals to become financially independent and globally exposed thereby contributing immensely to the global economic growth.

KEDI unarguably has one of the best Compensation Plans in the industry laced with numerous life-changing packages to transform the lives of her distributors like her unique Mutual Fund Plan, Health Insurance Plan, amazing Scholarship Plan, unbeatable Corporate Social Responsibility Efforts, all-expenses paid International Tours for her distributors, Villa Award and her biennial Car Award which have empowered her distributors and made them live a fulfilled life.

KEDI business is highly lucrative and flexible to accommodate the interest of different strata of people whether employed, underemployed or unemployed. KEDI is indeed for everyone regardless of tribe, religion, race, educational background or colour. Join us today and live the life of your dreams.

The Company appreciates the  support of all our sponsors most especially FIDSON PLC and ZENITH BANK PLC in making the event a reality.