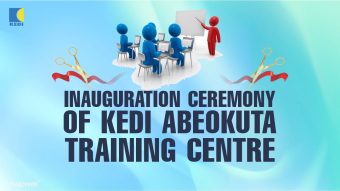 Dignitaries, top leaders in the business, distributors and residents of Abeokuta and its environs were elated as they turned up massively in splendour and elegance for the grand occasion which took place at the office premises cited strategically at Anike House, Isale-Igbehin, Abeokuta, Ogun State.

The grand opening of Abeokuta Training Centre was a dream come true for distributors and residents of Abeokuta and its environs as they danced heartily and cheered loudly because according to them, the management of KEDI has finally heeded to their request.

Speaking with our reporter in an after-event interview, one of the top leaders in Abeokuta Region, Mr. Richard Kilanko expressed his unreserved gratitude to the management for bringing a Training Centre to Abeokuta. In his words, “Distributors in Abeokuta Region and Ogun State at large have been side-lined for too long. To submit achievement, we go to the Head Office sometimes, other times, we travel hundreds of kilometres to Ibadan Training Centre which is extremely dangerous and demotivating but now, KEDI is closer to us. We can now enjoy training and retraining programs, easy submission of achievement, swift access to products and so on. It is indeed a new dawn for us in Abeokuta”.

The inauguration ceremony was a 3-day event which began with a Roadshow on Thursday, 28th July, 2022. The Roadshow kicked off by 12pm, distributors and excited residents converged in front of the office premises and moved out, chanting KEDI slogan amidst trending songs played by a Disc Jockey through a sound amplifier. Major roads and towns were covered as distributors distributed flyers and shared the health and wealth message of KEDI with everyone they came across.

On Friday, 29th July, 2022, the event continued with a PRE-OPENING CEREMONY EXTRAVAGANZA which can also be called a BRAND REGISTRATION MOBILIZATION CAMPAIGN. Unlike the Roadshow, distributors simply stood in front of the Training Centre, distributed flyers to passers-by as the Disc Jockey played different sonorous tunes. Passers-by and onlookers were amazed and some drew closer to the distributors to know about KEDI and her offerings.

History was made in KEDI on Saturday, 30th July, 2022 as her sixteenth Training Centre was inaugurated in her sixteenth year of operation in Nigeria. It is noteworthy that KEDI Abeokuta Training Centre is the sixteenth of its kind as the Company hitherto had fifteen Training Centres in Ikeja, Apapa, Uyo, Benin, Port Harcourt, Enugu, Yola, Kano, Ilorin, Abuja, Bauchi, Onitsha, Ibadan, Bayelsa and Kaduna respectively.

After the opening prayer which was done in a Christian way by Mr. Moses Egbeniyi by 10:02am, all the dignitaries and top leaders were duly recognized and celebrated after which the Master of Ceremony (MC) ushered the Marketing Manager to the podium to give his welcome address. As he spoke, the already elated audience couldn’t help but cheer him on as they were thrilled so see a Chinese welcoming them and delivering the management’s goodwill message to them.

After the Marketing Manager’s welcome address, each top leader took turn to address the audience as they shared their ‘grass to grace’ story, how they rose from zero level to become international icons courtesy KEDI business. Each speaker enunciated how participating in KEDI promos, selling KEDI products and bringing more people to join KEDI, changed their lives beyond recognition.

Immediately after the testimonies, the lecturers of the day took the attendees through two powerful sessions. The first session was on KEDI products while the second session was on KEDI business. Questions poured in from every corner as attendees sought to clear their doubts about the Company’s offerings. The lecturers did justice to all their questions which further cleared their doubts and made almost eighty of the attendees register instantly to become distributors of KEDI.

In order to avoid boredom, different varieties were slotted in between the testimony and lecture sessions. Varieties like raffle draw, cultural dance, airtime giveaway popularly known as ‘fastest finger game’ were used to thrill the audience. At the end of the raffle draw session, five people won one Dolphin Massager each while five persons won one set of Liushen Combo each. Ten different people also won airtime in the fastest finger game.

Food and drink were given to each attendee after the cake-cutting session which was done by all dignitaries and top leaders present as led by the Branch Marketing Officer, Mr. Daniel Ibrahim.

In his closing remark, the Marketing Deputy Manager appreciated all the attendees and implored them to take advantage of the presence of the Training Centre to grow their business so that they can enjoy more privileges and bonuses in KEDI. He assured them that the management will stop at nothing to ensure that her distributors all over the world continuously enjoy sound health and great wealth in line with the Company’s vision.

Group photographs were taken after the closing prayer which was done in the Muslim way by Alhaja Bintu Sanisu and everyone left the venue delighted.  In spite of all the remarkable achievements the Company has recorded in her sixteen years of operation in Nigeria, we are still waxing stronger. In fact, we are just getting started because until our impact is greatly felt all over the world, we are not stopping. So, stick with us as we grow together.