KEDI AT SIXTEEN – A MEMORABLE CELEBRATION 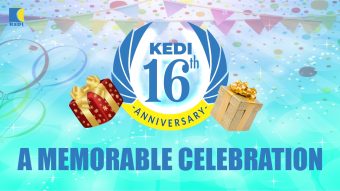 KEDI AT SIXTEEN – A MEMORABLE CELEBRATION

Since the inception of KEDI Healthcare Industries Nigeria Limited in June 2006, the month of June has always been a month of glamour and festivities, this year was not an exception.

Although there was no party/feast to mark the Company’s sixteenth anniversary due to the forthcoming seventh Car Award Ceremony which is set to come up later in the year, the management, staff, distributors and customers of KEDI couldn’t conceal their excitement as they excitedly celebrated the grand event in clusters.

It is worthy of note that KEDI is the baby of a renowned humanitarian and philanthropist – Mr. William Zhao whose vision of improving health and eradicating poverty not just in Nigeria but the African continent at large, has for the past sixteen years liberated mankind from diverse illnesses through her highly-efficacious healthcare products and alleviated poverty through her life-impacting offerings.

The sixteenth anniversary celebration commenced in grand style on Wednesday, 1st June, 2022 at all our Training Centres nationwide with our SPECIAL ANNIVERSARY SEMINARS where all the attendees were led to participate in our SPECIAL ANNIVERSARY RAFFLE DRAW for a chance to win one pack of Memory 24/7 capsule. New attendees were not left out of the celebration as they were all given a branded KEDI@16 face cap each. This double awoof ended on 16th June, 2022.

For the first time in sixteen years, a special raffle draw game was flagged off on the Company’s mobile application – KEDI APP for distributors who have a registered account on the APP to spin daily and win cash prizes. To participate and win, all that distributors needed to do was to download KEDI APP, register their account, spin daily to win big. The game which fetched thousands of distributors, exciting cash prizes was valid from 11th to 30th June, 2022.

The Annual Social Media Week, a week set aside for the online celebration of the Company’s anniversary, was lit as different highly informative and educative posts which were carefully-tailored and delivered in a well-organized pattern were used to showcase the Company’s achievements for the past sixteen years. The series of posts covered the Company’s wide range of products and other offerings like Health Insurance Plan {HMO Plan}, Mutual Fund Plan, Scholarship Plan, the Company’s Awards and Certifications, before and after pictures of some hallmark achievements of the Company and for the first time ever, an appreciation letter from the Managing Director, Mr. Alex Zhao was equally circulated even as distributors and customers all over the world took turns to send in their goodwill messages to the Company on the grand occasion of her sixteenth anniversary.

The celebration did not end without an online commemorative broadcast which was held during TALK TO KEDI (the Company’s online broadcast) which took place on Thursday, 16th June, 2022 on the Company’s Facebook page @kedihealthcareindustries and her Instagram account @kedihealthcare_official with a recorded version which was uploaded on the Company’s YouTube channel – KEDI HEALTHCARE. The broadcast x-rayed the various achievements of the Company these sixteen years and viewers were randomly selected from the comment section and rewarded for their participation. At the end of the broadcast, each winner got one pack of 7-layer Panty Liner for participating in the commemorative broadcast.

While we heartily congratulate all our distinguished distributors and customers all over the world on the grand occasion of our sixteenth anniversary, we urge them to stick with us and keep representing the great KEDI brand in their respective locations as we remain committed to continuously dishing out more life-transforming offerings to empower and compensate our distributors always. Happy 16th Anniversary KEDIANS!