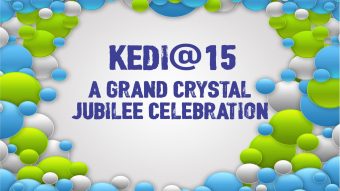 Glamour and splendor are the words that best describe the celebration of KEDI’s fifteenth anniversary which kick started in grand style on Tuesday, 1st June, 2021 both online on all her social media platforms and offline at all her offices nationwide. The much-anticipated fifteenth anniversary was received with so much excitement by the distributors, staff and management of the great Company who were overwhelmed with great joy owing to the giant strides and excellent achievements recorded by the Company in her fifteen years of operating in Nigeria.

KEDI Healthcare Industries Nigeria Limited was founded by a living legend – Mr. William Zhao and the Company commenced operations in Lagos, Nigeria on 18th June, 2006 with the aim of continuously providing quality healthcare products and a matchless business platform which is aimed at providing financial independence and a secured future for all.

Although the biting effect of the global pandemic has subsided, the government’s restriction on the number of persons in a public gathering has not been reviewed which toned down the purposed elaborateness of the fifteenth anniversary celebration. However, various activities were earmarked both online and offline to make the event a memorable one.

Flagging off the notable Crystal Jubilee Celebration was an ANNIVERSARY AWOOF RAFFLE DRAW which was successfully held at all her Training Centres nationwide for all seminar attendees from 1st to 17th June, 2021. All the attendees at our weekly seminars were given an equal opportunity to participate in the raffle draw and win ONE SET OF LIUSHEN SELF-CARE COMBO.

Winners of the ANNIVERSARY AWOOF RAFFLE DRAW were invited to our anniversary party where they participated in our SPECIAL ANNIVERSARY RAFFLE DRAW alongside the top leaders and other selected attendees.

In the same vein, series of colorful posts with the anniversary slogan and hashtags were posted from the first day of the anniversary month (June) through our Annual Social Media Week which took place from Monday, 14th of June to Friday, 18th of June, 2021 in celebration of the company’s fifteen years outstanding achievements.

The Annual Social Media Week featured different highly informative and educative posts which were delivered in a well-organized pattern and were used to showcase the Company’s wide range of products and celebrate the Company’s Initiatives {Health Insurance Plan (HMO Plan), Mutual Fund, Scholarship, Seasonal Products and Brand Collaboration}amongst others. Distributors and customers took turns to send in their congratulatory messages to the Company on the occasion of her fifteenth anniversary celebration.

As part of the Crystal Jubilee Celebration, two editions of the Company’s Online Broadcast – TALK TO KEDI was held on the 3rd of June and 17th of June respectively on our Facebook page @kedihealthcareindustries and our Instagram handle @kedihealthcare_official. The first edition focused on THINGS YOU SHOULD YOU KNOW ABOUT KEDI X LIUSHEN BRAND COLLABORATION while the second edition focused on THE UNIQUENESS OF KEDI in celebration of the Company’s fifteen years achievements.

The Anniversary Party was lit at our Head Office and all our Training Centres nationwide on Friday, 18th June, 2021 except for our Kano and Yola Training Centres who held theirs on Saturday, 19th June, 2021 in order to allow our Muslim distributors and customers observe their weekly Jumat Service which usually holds on Fridays. The party was well organized and coordinated at the respective venues. It featured varieties like cake cutting, exciting games, talent show and all our Awoof Raffle Draw Winners joined other attendees to participate in our Special Anniversary Raffle Draw where awesome prizes were won.

At the end of the celebration, three hundred and fifty five (355) people won ONE SET OF LIUSHEN SELF-CARE COMBO, forty (40) people won N50, 000 WORTH OF PRODUCTS while twelve people (12) people won N100, 000 WORTH OF PRODUCTS at all our Training Centres across the country. We extend our sincere appreciation to everyone who participated in our Crystal Jubilee Celebration and we heartily congratulate the winners of our Anniversary Awoof Raffle Draw and our Special Anniversary Raffle Draw who have since collected their prizes.

Although the Anniversary Celebration has ended, the promo is valid till 31st of August, 2021. We urge our distributors and customers not to relent in the purchase, sales and usage of our LIUSHEN SELF-CARE COMBO so as not to miss out on the magic of the amazing personal care products.