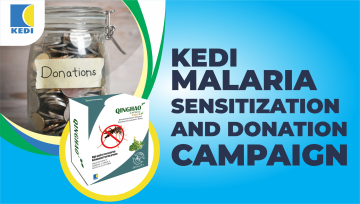 Malaria is a deadly disease that accounts for the death of thousands of people across the globe annually. With an alarming increase in the infection rate all over the world, the need for prompt intervention has become inevitable.

Several strategic plans have overtime been developed to control this menace. Well-meaning individuals and corporate bodies have embarked on diverse Malaria control interventions to help in the fight against this life-threatening disease.

As a world-class healthcare provider, KEDI is championing a fierce battle against Malaria through apt sensitization and a massive donation to local communities in states where her Branch and Regional Offices are located across the country as part of her efforts to accelerate progress towards malaria elimination.

In line with her Five Years Development Plan geared towards giving back to the society and forming a healthy synergy to immensely contribute to the growth and wellness of Africans and the world at large, the month of April has been tagged KEDI MALARIA AWARENESS MONTH and different activities were carried out both online and offline in a bid to sensitize the general public about the dangers, prevention and treatment of Malaria.

The activities were flagged off with series of online enlightenment posts about Malaria on all her social media platforms as well as an ONLINE MALARIA AWARENESS CHALLENGE tagged KEDI #ZEROMALARIABEGINSWITHME CHALLENGE where followers were made to share a SPECIALLY DESIGNED AWARENESS POST with their friends in order to enlighten the general public about Malaria.

In furtherance of the thorough sensitization campaign, a 10-minute comprehensive HEALTH TALK ON THE DANGERS AND PREVENTION OF MALARIA was held consistently during the weekly seminars at all our Training Centres nationwide. Attendees were opportuned to ask questions on the prevention of Malaria as well as how Qinghao capsule can be effectively used to tackle Malaria. Our seasoned lecturers were present to enlighten the attendees and do justice to their questions.

A Special Commemorative Malaria Day Broadcast was held on Thursday, 22nd of April, 2021 on our Facebook page – @kedihealthcareindustries and our Instagram account – @kedihealthcare_official to further inform, educate and enlighten the public on the DANGERS, PREVENTION AND TREATMENT OF MALARIA. A Seasoned Malariologist in person of Dr. Muhammed Dauda Oluwatoyin was invited as a guest to educate viewers on how they can prevent Malaria and also treat themselves with KEDI Qinghao capsule when the need arises. The elated viewers did well to ask questions about the proper usage of KEDI’s well-known antimalarial tablet – Qinghao capsule which the guest provided appropriate answers to.

Most importantly, KEDI embarked on a massive donation to local communities most affected by Malaria with the aim of helping the communities eradicate and control the increasing infection of Malaria. To achieve this act of benevolence, KEDI teamed up with her distributors and customers as every pack of Qinghao capsule sold this month, KEDI will donate N100 to local communities across the country to help them fight against Malaria.

The Malaria Awareness Sensitization and Donation which took place between Monday, 19th of April, 2021 and Saturday, 24th of April, 2021 had in attendance thousands of people comprising inhabitants of the host communities as well as strangers from neighboring communities who gathered together with so much expectance and elation to receive not just the gift items to be donated but also the health and wealth that KEDI offers.

Items donated in all the communities visited across the country through our Branch and Regional Offices amounted to millions of naira. The items include: 1,000 packs of Insecticide-treated Mosquito Nets, 2,000 packs of our highly efficacious antimalarial tablet – Qinghao capsule as well as 1,000 copies of our detailed MALARIA HANDBOOK, were all distributed to the attendees present.

The people of Iganmu Amukoko, Lagos couldn’t conceal their excitement as they filled the event’s hall hours before the commencement of the event in readiness for the sensitization and donation program. The event which took place at Methodist Church, Iganmu Amukoko, Lagos was graced by Top Leaders, Distributors and Residents of the community, both young and old. Attendees were thrilled and led to participate in an oral game tagged “KEDI Malaria Awareness Oral Exercise” where attendees were made to chorus the Malaria Awareness Slogan – (Zero Malaria Begins with Me) repeatedly and urged to do same with their loved ones after the event.

The Village Head of Ikot Ntuen Nsit in Uyo, Akwa-Ibom State was present to receive the representatives of the company as he opined that such laudable feat has never happened in the community. On behalf of the villagers, he appreciated the management of KEDI for this initiative which he affirmed would contribute immensely towards the eradication of Malaria in the village.

In Enugu, a sensitization rally was held in Nsukka Community. Both distributors and non-distributors alike embarked on a thorough sensitization rally and with the aid of a voice amplifying device, they educated residents of the community on the dangers, prevention and treatment of Malaria. Residents who yearned to know more, trooped to the venue of the Sensitization and Donation Programme where they were taken through an in-depth enlightenment session after which the donation items were evenly distributed to all the attendees present.

The people of Mubi in Adamawa State came out en masse to participate in the Sensitization and Donation Programme regardless of the euphoria of the ongoing Ramadan. Apart from the Malaria donation items, the company’s newsletter was also distributed to help attendees know more about the company and all her offerings.

In Adigbe, Abeokuta, some dignitaries were present to grace the event and their joy knew no bounds as they warmly received KEDI with open arms and appreciated the management of KEDI for this highly commendable initiative which will undoubtedly eliminate Malaria in the community.

Commenting on behalf of the residents of Ngwa Settlement in Abia State, the Traditional Ruler extended his sincere gratitude to the management of KEDI for her Malaria Eradication Initiative and challenged other organizations to emulate KEDI as we earnestly continue the fight against Malaria.

Although the cost of funding the Sensitization and Donation Campaign amounted to millions of naira, it was certainly a worthy cause geared towards the eradication and elimination of Malaria in Nigeria. Indeed, only a reputable healthcare provider like KEDI can embark on this laudable feat and we will never rest until Malaria finally becomes history in Nigeria and the African continent at large.