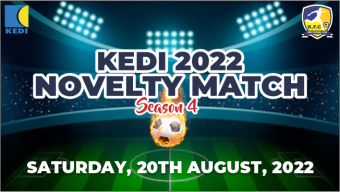 The ancient Elegbata town in Apongbon, Marina, Lagos stood still on Saturday, 20th August, 2022 in awe of the glam and splendour of KEDI 2022 Novelty Match which took place at Elegbata Sport Complex. Residents of the town and passers-by couldn’t help but watch in admiration as the entire stadium emitted KEDI’s colours – blue and yellow, in full readiness of the friendly match between KEDI Staff Team and KEDI Distributors Team.

Although the event was billed to commence by 10:00am, the stadium was half full as at 9:00am with both staff and distributors as players from each team took time to put themselves together and also add some finishing touches to their preparation. Top leaders and distributors trooped in from far and near to cheer the distributors team to victory. Some of the top distributors present at the event are – Mr. Kehinde Adeyemi, Mr. Ogunleye Kolawole David, Mr. Alani Abiodun, Mr. Kingsley Nsirimobi, Mrs. Abiodun Roberts, Mrs. Mojisola Ajimotokin, and Mrs. Oludare Modupe amongst others.

The presence of the management team by 10:00am gave the event an exciting ambience and brought the event to its commencement. The event commenced at exactly 11:00am with an opening prayer which was done in the Christian way by Mrs. Abiodun Robert after which it was time for the recitation of the national anthem of the two countries represented at the event – Nigeria and the People’s Republic of China. The recitation of the anthems was led by the Disc Jockey who played both anthems with the aid of his sound equipment as the attendees chorused along happily.

After the introduction of the Chinese, the Marketing Manager – Mr. Michael Wu gave a warm welcome speech where he spoke about the importance of sport and fitness. He also reiterated the prize that will be given to both the winning team as well as the first runner up as N300, 000 and N200, 000 respectively.  Immediately after the welcome speech, the Chinese gave all the players an official handshake and at exactly 11:25am, the Operations Manager – Mr. Roger Luo officially kick-started the match with a sharp golden kick off which was received with a loud ovation by the audience.

The two teams in their KEDI coloured jersey played excellently well. Each team displayed exceptional skills and proved their readiness with brilliant passes, matchless strikes and shots. The intense of the game was unmistaken, it was not surprising that three minutes into the match, at exactly 11:28am, Mr. Earnest Ezekiel scored the first goal in favour of the distributors’ team.  Exactly four minutes later by 11:32am, an equalizing goal was scored by Mr. Peter Adegoke in favour of the staff team.

Two minutes after the equalizing goal, Mr. Aderoju Musa scored the second goal in favour of the distributor’s team. At 11:57am, a foul was committed by one of the players representing the staff team which led to a penalty kick and eventually led to the distributors’ third goal.

At the end of the match, medals were presented to all the players in both teams. Special awards were also presented to some exceptional players in the following categories:

A prize of N200,000 was presented by Ms. Doris Bourmel to KEDI Staff Team for emerging as the First Runner up while Mr. Roger Luo presented the trophy and a sum of N300,000 to the Distributors Team, the winner of the match. In his closing remark, Mr. Felix Adedoyin – the Event Officer congratulated the winning team and appreciated everyone for attending the event and contributing immensely to the success of the event after which Mr. Charles Nweke, the Marketing Manager gave the vote of thanks.

Group photographs were taken and everyone had something to eat and drink. Because it was a friendly match aimed at concretizing the bond between the distributors and the staff, the two teams and all their supporters ate, drank, danced and took pictures together and everyone left the venue elated and cheerfully looking forward to the next season.