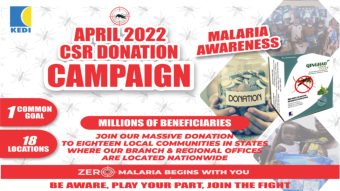 Malaria is indeed a disease without borders and it is not a respecter of age, gender, tribe, race or religion. Statistically, Africa carries the highest share of the global Malaria burden as well as death cases in the world. It is in view of this that the management of KEDI Healthcare Industries Nigeria Limited takes it upon herself every year to embark on a thorough sensitization and donation campaign in order to liberate Africa from this deadly but treatable disease.

Every year, KEDI invests heavily in a deliberate massive public enlightenment campaign both online on all her social media platforms and offline at all her offices nationwide. Different intensive sessions are handled by her seasoned Lecturers who leave no stone unturned as they educate the public on the prevention, causes, complications and treatment of Malaria at her weekly seminars throughout the month of April. Apart from the thorough public enlightenment campaign on Malaria, KEDI also stretches her hand of love every year to local communities mostly affected by Malaria in states where her Branch and Regional offices are located nationwide and this year was not an exception.

This year’s activities were flagged off with series of public enlightenment posts about Malaria and its complications on all the Company’s social media platforms. In like manner, a 10-minute HEALTH TALK was observed consistently throughout the month of April on HARNESSING INNOVATION TO REDUCE THE MALARIA BURDEN AND SAVE LIVES in line with the theme of this year’s World Malaria Day. The talk was held during the weekly seminars at all our Training Centres nationwide and attendees were opportuned to ask questions on the prevention measures, causes and complications of Malaria as well as how KEDI Qinghao Capsule can be effectively used in the global fight against Malaria.

In order to reward her distributors and customers with her efficacious antimalarial product – Qinghao Capsule this commemorative season, KEDI provided a mouthwatering promo tagged KEDI 2022 MALARIA AWARENESS MONTH SPECIAL PROMO where thousands of people got ONE PACK OF QINGHAO CAPSULE FREE for every purchase of ONE BAG OF 7-LAYER PANTY LINER and ONE PACK OF MEMORY 24/7 CAPSULE respectively.

In commemoration of 2022 World Malaria Day and to further inform, educate and enlighten the public on how they can harness innovation to reduce the Malaria burden and save more lives as well as the Federal Government’s efforts in tackling Malaria, an Assistant Director of the Federal Ministry of Health – Mr. Taiwo Emmanuel Afolabi graced the Special Commemorative Malaria Day TALK TO KEDI Broadcast which was held on Thursday, 21st of April, 2022 on our Facebook page – @kedihealthcareindustries and our Instagram account – @kedihealthcare_official with the recorded version uploaded on our YouTube channel – @KEDI HEALTHCARE. The elated viewers did well to ask questions about how they can prevent Malaria as well as the proper usage of KEDI’s well-known, loved and respected antimalarial tablet – Qinghao Capsule which the guest did justice to.

Apart from the public enlightenment about Malaria, KEDI visited EIGHTEEN LOCAL COMMUNITIES across the country with a massive donation and sensitization programme aimed at helping communities eradicate and control the increasing infection of Malaria.

The Malaria Awareness Sensitization and Donation which took place between Tuesday, 19th of April, 2022 and Saturday, 30th of April, 2022 had in attendance thousands of people comprising inhabitants of the selected communities as well as strangers from neighboring communities who gathered together with so much expectance and elation to receive not just the gift items to be donated but also the health and wealth that KEDI offers.

In all the communities visited across the country through our Branch and Regional Offices, about 900 Insecticide-treated Mosquito Nets, 900 packs of our highly efficacious antimalarial tablet – Qinghao Capsule, 900 copies of our detailed Malaria Handbook, 1, 800 bottles of Hand Sanitizer and 3, 600 Customized Facemasks were distributed to the attendees present.

The inhabitants of the host communities expressed their sincere gratitude to the management of KEDI as they received the gifts and the health and wealth message of KEDI with great excitement.

As a reputable healthcare organization, KEDI will continue to exert efforts in the global fight against Malaria until the deadly disease is eradicated in the African continent and all over the world. STICK WITH US AS WE IMPACT LIVES TOGETHER