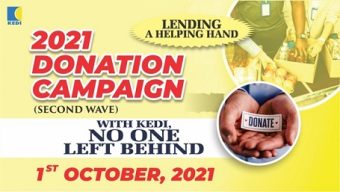 The hallmark of a life-impacting organization is characterized by policies that promote the well-being of the society. As part of her Corporate Social Responsibility efforts as stated in her Five Years Development Plan, KEDI Healthcare Industries Nigeria Limited join hands with her distributors annually to donate millions of naira to the less privileged and orphans in Nigeria and the African continent as a whole.

In realization of this meritorious plan, KEDI embarked on the first wave of her annual donation campaign in commemoration of 2021 World Malaria Day in April as relief materials were distributed to local communities mostly affected by Malaria in states where her offices are located nationwide in a bid to help them combat the life-threatening disease.

Coinciding with the nation’s Independence Day celebration on Friday, 1st October, 2021; the second wave of KEDI 2021 Donation Campaign was massive indeed as the Company’s representatives and distributors paid a courtesy visit to fourteen different Orphanage Homes in states where her offices are located nationwide.

Some of the items donated to the Orphanage Homes include consumables, electrical appliances as well as KEDI products and customized souvenirs. Apart from the items donated, the children were taken through an intensive session on “The Human Body” where they were taught how to identify parts of the human body and how to take care of the various parts of their body. After the lecture, the children took turns to ask questions about the human body and factors that can necessitate body growth.

The donation event escalated into a full brand awareness event as residents of the communities where the Homes are cited, gathered together to appreciate the magnanimity of the Company that chose to dazzle the underprivileged children with so much love.

In Lagos, on behalf of the Management of KEDI, the Sales Manager – Mr. Michael Wu warmly appreciated the Founder of the Home for investing into the future of the children who he referred to as the “leaders of tomorrow”. He also inspired the children to embrace excellence, determine never to settle for less and pursue their dreams as nothing is capable of limiting their success. He however reassured the thrilled audience that the Company will never relent in alleviating poverty and empowering mankind as these represent her corporate goals.

In Yenogoa, Bayelsa State; the children were super excited as gifts were given to all the children who participated in the Question and Answer session after the lecture. They waved their gifts with so much excitement as they chanted the Company’s slogan unanimously as taught by the Branch Marketing Officer.

The event did not start until after the Jumat Service (a weekly Muslim religious gathering) in Sabon Gari, Kano State. The children were assembled at the Home’s dining hall as the Chief Imam (a senior religious cleric) heartily received the Company’s representatives and extended his deepest appreciation to the management of the Company for remembering the children at a time when there is so much hunger, strife and uncertainties in the polity. He thereby prayed for the Company’s growth and continuous expansion as a result of the kind gesture extended to the less privileged in the society.

In her closing remark, the Founder of Government Orphanage Home and Day Care Centre, Yola, Adamawa State, thanked the management of KEDI for extending this gesture of goodwill to the Home at such a time as this. Stating that the gesture will go a long way in ensuring the comfortability of the children.

Group photographs were taken at the respective locations and everyone left the venue elated.

Regardless of the current global economic inconsistencies, KEDI stands tall and remains undeterred in giving back to the society and contributing immensely to the wellbeing of mankind across the nations of the world. Indeed with KEDI, no one is left behind!