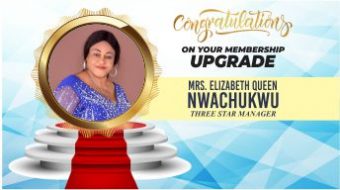 Success in life is indeed not for those who run fast but for those who keep running and are always on the move hence, a successful entrepreneur is one who knows he can fail but does not accept to fail before he actually fails but when he eventually fails he learns from his errors and moves on to the next height of greatness. This sentence best summarizes the success story of Mrs. Elizabeth Queen Nwachukwu, the owner of Service Centre 256 located in Enugu State who recently added another feather to her cap of honor as she emerged Three Star Manager level in the business.

From the Coal City State – Enugu State, her KEDI story began in 2012 when she joined the business with an unquenchable thirst for success. She journeyed through thicks, thistles and thorns because Rome indeed was not built in a day.

She gave herself to so much knowledge – knowledge about the company’s products, compensation plan as well as how to strategically position her business for growth and within a couple of years, she understood the real meaning of financial freedom.

In her words, “joining KEDI provided an avenue for me to improve myself by reading voraciously and attending educative and life inspiring seminars. Today, I am not just living the life of my dreams but I am now a seasoned lecturer who impeccably delivers lectures and presentations in different parts of the country. Much more than that, my life has been completely transformed”.

As a multiple award-winning distributor, Madam Lizzy as she is fondly called, has won up to FOUR CARS courtesy KEDI CAR AWARD PROMO, she has also enjoyed FREE INTERNATIONAL TRAVEL to Malaysia, Singapore, United Arab Emirates, the People’s Republic of China to mention a few, courtesy KEDI TRAVEL PROMO. She is also a winner of KEDI VILLA AWARD amongst other enviable achievements of hers.

Some of the attributes that contributed significantly to her success are DETERMINATION, CONSISTENCY, POSITIVITY and CREATIVITY. With a strong determination to impact her world, Mrs. Elizabeth Nwachukwu has taken it upon herself to groom and mentor people around her thereby passing on the health and wealth message of KEDI.

Indeed, without an indomitable will and courage, daring success is impossible because success belongs only to those who have the patience and doggedness to turn their dreams to reality.

JOIN THE MOVING TRAIN, STICK WITH KEDI, FULFIL YOUR DREAMS & BECOME THE NEXT LIZZY NWACHUKWU! BE INSPIRED FOR EXCELLENCE!!!