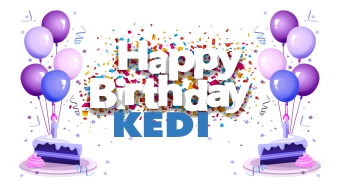 It was indeed a season of goodness as KEDI Healthcare Industries Nigeria Limited celebrated her fourteenth anniversary amidst lots of ovation, excitement and admiration. The staff and distributors couldn’t contain their joy as they took to all available platforms to celebrate a company which has added value and meaning to a lot of lives and still redefining the lives of many others in just fourteen years.

It is worthy of note that KEDI was founded by a great humanitarian and philanthropist – Mr. William Zhao and the company commenced operations in Lagos, Nigeria on the 18th of June, 2006. Since then, the company has been committed to the continuous provision of quality healthcare products and a matchless business platform which is aimed at providing financial independence and a secured future for all.

With the government’s restriction on public gatherings, the company could not throw a celebration feast as it is in her culture annually. However, different activities and special offers were packaged both online and offline to give the event the glamour and relevance that it deserved.

The Special Anniversary Offers include:
Offer 1: Buy one CELLO Q10 and get either one small Reishi or one packet Re-vive FREE. Offer duration:  11th to 30th June, 2020.

Any order placed on the company’s website {www.kedihealth.com} throughout the month of June will get FREE DELIVERY.

Offer 3: Participate in MY STORY WITH KEDI ONLINE CAMPAIGN by simply dropping a comment on the special MY STORY WITH KEDI post which was posted on the 1st  of June, share the post on the participant’s timeline and tag either the company’s Facebook, Twitter or Instagram handles and stand a chance to win one packet Re-vive. Offer duration: 1st to 30th June, 2020.

From the first day of June, the euphoria of the anniversary celebration commenced on all of the company’s social media platforms as tastefully exclusive anniversary display picture and cover pictures were posted to officially flag off the laudable event. On the same day, the third anniversary special offer commenced with a special MY STORY WITH KEDI ANNIVERSARY POST which was posted on the company’s Facebook, Instagram and Twitter handles for followers to comment, share on their timelines and tag the company’s handles and stand a chance to win ONE PACKET RE-VIVE.

Series of colorful posts with the anniversary slogan and hashtags were posted throughout the Anniversary Social Media Week which took place from the 15th to 20th of June, 2020 to celebrate the company’s fourteen years achievements. The Anniversary Social Media Week aimed at commemorating the company’s landmark achievements came with highly informative and educative posts in a well-organized pattern as thus:

Giving the epoch event more glamour was the Special Anniversary Edition of TALK TO KEDI – an educative online broadcast which holds fortnightly on the company’s Facebook page – @kedihealthcareindustries, which took place on KEDI’s birthday – 18th of June by 12:00pm. Distributors and customers all over the world used the platform to celebrate with their trusted business partner on the occasion of her fourteenth anniversary.

The special anniversary offers undeniably cheered up the distributors greatly especially the first offer that gave them the opportunity to get an extra product when they purchase one jar of CELLO Q10 Tablet. At the end of the offers, thousands of distributors nationwide emerged as winners in the different promo categories. Many distributors won either packet Re-vive or small Reishi for purchasing CELLO Q10, some others won one packet Re-vive for participating in the third offer – MY STORY WITH KEDI ONLINE CAMPAIGN as carefully selected from our Facebook, Twitter and Instagram handles while some new distributors who registered and upgraded to Five-Star Consultant between 11th to 30th of June got a cash prize of N100, 000 as stated in the second offer. We sincerely appreciate everyone that partook of the celebration, we equally congratulate all the winners of our Special Anniversary Offers as we promise to provide our esteemed distributors and customers with more fantastic promotions, more compensatory packages and more quality healthcare products to continuously secure the health of mankind. As your trusted business partner, your sound health and great wealth remain our priority. Just stay glued to us and your success is guaranteed!