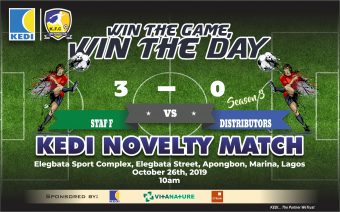 It was all shades of fun, thrills and excitement as the Management and Staff of KEDI Healthcare Industries Nigeria Limited engaged her Distributors in a novelty match as part of the company’s initiative to promote her image, foster good working and business relationship, create brand awareness and registration, promote fitness culture and encourage bonding between the organization, her distributors and the Society at large.

Elegbata Sports Complex, Elegbata, Marina, Lagos – the venue of the match was colourful as people trooped in from far and near to watch the faceoff between KEDI Staff Team and KEDI Distributors Team and to cheer their preferred team to victory.

The presence of the top management as well as all Chinese Staff at the event made the event unique and plausible. Top distributors were not left out too as they were present to encourage the distributors’ team with their presence and cheer them on to victory. Topping the list were Mr. Kingsley Nsirimobi, Mr. Alani Abiodun amongst others.

After the recitation of the Nigerian and Chinese Anthem respectively, the Managing Director – Mr. Alex Zhao gave his welcome speech and hitherto declared the match officially open by 10:30am with a golden kick off which was received with a loud ovation as spectators watched the match with keen interest amidst the blasting of good tunes by the Disc Jockey (DJ).

The two teams in their colorful jerseys (Yellow for Staff Team and Blue for Distributors Team) displayed youthful skills in the field of play with brilliant passes and skillful dribbling from both ends. The match turned out to be tight as each team came with so much determination to win, this was evident in the manner of play displayed by each team.

At the thirty-sixth minute, a penalty was awarded in favour of the Staff Team as a player from the Distributors Team committed a direct free kick offence inside the penalty area leading to the first goal which was scored by Peter Adegoke.

An own goal in favor of the Staff Team was scored at the fifty-sixth minute (which is eleven minutes into the second half of the match) by Joseph Agba of the Distributors Team. At this point, even though the distributors were disappointed, they refused to give up as they kept substituting players and giving their best shot.

The trophy was presented to the Staff Team by the Managing Director who admonished the winning team to be humble in victory and encouraged the Distributors Team to try harder next edition. Ms. Doris Bourmel in her closing remark, thanked everyone for coming, congratulated the winning team and assured everyone present of the management’s commitment to providing life changing deliverables.

Group photographs were taken and everyone had something to eat and drink. The two teams and all their supporters ate, drank, danced and took pictures together and everyone left the venue elated, cheerful and looking forward to the next edition. The grand event was proudly sponsored by KEDI Healthcare Industries Nigeria Limited, Vitanature International Company Limited and Guaranty Trust Bank.