IMPACTFUL SEMINARS IN THE MONTH OF JULY 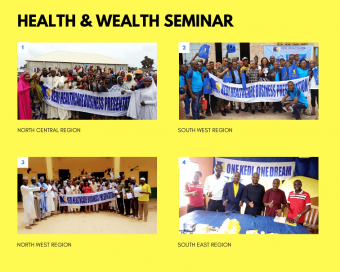 IMPACTFUL SEMINARS IN THE MONTH OF JULY

The health and wealth seminars held across the Country in the month of July recorded a massive turn out owing greatly to the unveiling of the 2020 Car Award Promo and the ongoing 2019 KEDI SAUDI ARABIA Trip. As part of her 5 year plan, KEDI’s commitment to providing dream-fulfilling promos and all expense paid International Travels has highly placed her in a pedestal of excellence which has hitherto rubbed off on the attendance and quality of her seminars across the Continent.

Different Cities and States across the Country were penetrated with the apt knowledge and use of Traditional Chinese Medicine (TCM) as attendees were thoroughly schooled on its usage, methodologies and effectiveness as well as the self empowerment platform provided by KEDI to alleviate poverty and better the lives of the citizenry.

Some of the States and Cities where these life impacting seminars were held include: Kontagora in Niger State, Wase, Kanam and Jos City in Plateau State, Adoka and Adikpo in Benue State, Kirikasama, Biriniwa and Guri in Jigawa State, Shagari and Yabo in Sokoto State, Zonkwa in Kaduna State, Bunza and Dakingari in Kebbi State, Onitsha and Ekwusigo in Anambra State, Ohafia in Abia State, Ikwo Onicha in Ebonyi State, Filiya, Kwayakusar and Shongo in Borno State, Kumo and Quodom in Gombe State, Edepie in Delta State, Ewu Ughelli and Issele Uku in Delta State, Obudu in Cross River, Ogbia in Bayelsa State amongst others.

The colourful grand opening of Service Centre 538 owned by Mr. Adegbite Adeola Wasiu in Kontagora, Niger State drew a mammoth crowd from far and near as people gathered with a lot of enthusiasm to tap into the lucrative business platform that KEDI provides. The audience were thrilled as they were treated to lots of food, drinks, dance and motivational talk on how they can live a life void of poverty by embracing KEDI Business.

In Jos, over a thousand people trooped out to witness the Product and Business briefing which also doubled as the presentation of 2019 KEDI SAUDI ARABIA TRIP award to Dr. Adamu Ibrahim in the presence of the already elated crowd who couldn’t wait to also become beneficiaries of such life transforming opportunities courtesy KEDI.

The presence and the eventual motivational talk of the Women Leader of Kanam Local Government Area in Plateau State led to a massive registration as almost everyone present hurriedly received with open arms the health and wealth message which was brought by KEDI with the intent of transforming their lives, families and their community.

The heavy downpour didn’t stop the people of Onitsha in Anambra State from gathering together in good number to receive the KEDIFYING message from highly seasoned lecturers on various impactful topics. Product Demonstration was also carried out as the audience watched in amazement the potency and performance of KEDI 7-layer Sanitary Pad when compared to other regular pads.

The unveiling of 2020 Car Award Promo in Jigawa State inspired the audience towards the course of greatness as even new members left the event venue determined to strive to become beneficiaries of the numerous mouth watering promos that KEDI offers intermittently.

In conformity with our Corporate Social Responsibility Plan with respect to giving back to the society, there were FREE use of Blood Circulatory Machine and Quantum Analyzer, General Check up and consultation for everyone present at Shagari Mega Seminar in Sokoto State. A great number of people came out to be a part of this rare privilege and hitherto left with deep satisfaction and sincere gratitude to the Management of KEDI.

The impactful seminars had in attendance 4,132 people with about 634 people registering instantly to become beneficiaries of all the life changing packages that only KEDI offers. KEDI is indeed committed to changing lives and contributing her quota immensely to the sustainable development by delivering economic, societal and communal benefits for the good of mankind.