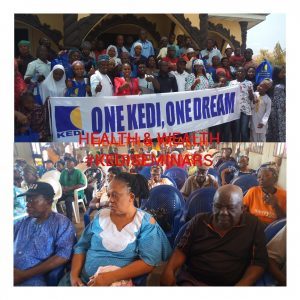 Knowledge is power. It belongs to humanity, and it is the torch which illuminates the world. Information is liberating and is the premise of progress in every given society irrespective of colour, tribe and religion. However, Knowledge that is not being used for winning of further knowledge does not even remain- it decays, disappears and amount to no good.

In the month of May, KEDI Healthcare penetrated different Cities and States across the Country with the apt knowledge of Traditional Chinese Medicine, its effectiveness and usage with the intent of providing quality healthcare services to the people. Also, the ever lucrative and life defining KEDI business was presented to the people who received with open arms, the knowledge of the transformative business which will undoubtedly turn their lives around.

In Niger State, the wife of the Controller General of National Park, Mrs. Shade Gomie graced the event with her presence which undoubtedly gave the gathering a face lift as the attendees were elated. Raffle draw was conducted by the Regional Officer and 5 lucky winners emerged. The mammoth crowd was elated as top leaders present took turns to share their grass to grace stories, instant registrations were recorded even before the seminar commenced. Distributors who have enjoyed KEDI Products overtime – especially a NAFDAC Representative who attended the event in Nasarawa State – also shared their testimonies which led to instant sales of the products.

In Makurdi, a new Service Centre (SC 559) was officially opened up by Mr. and Mrs. Sewuse Tingir who were excited to finally be a fully fledged partner of KEDI. A practical demonstration was conducted on 7-Layer Sanitary Pad, Mrs. Jennifer Langba and other distributors who have used our products gave testimonies in their local dialect.

In Cross-river State, some of the attendees who have had a bad experience with other networking companies were skeptical at first but after listening to the apt presentation of the lecturers and then the grass to grace testimonies of top leaders – how they rose from nothing to something through the help of KEDI Business, their face litted up with hope for the future.

In Jigawa State, one of the attendees who have used our Re-vive Capsule to treat Erectile Dysfunction and to boost his sexual performance almost took over the meeting as he explained thoroughly the effectiveness of KEDI Products and how one’s sound health is guaranteed with KEDI Products.

An awesome total of 3,792 people attended the seminars with about 806 instant registrations recorded. The seminars were indeed successful as everyone present left invigorated and mentally empowered to live healthy and grow wealthy with KEDI Products and KEDI Business.