INTERNATIONAL DAY FOR THE ERADICATION OF POVERTY 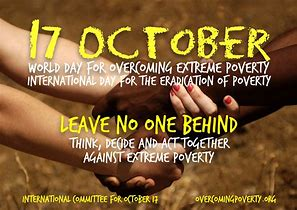 INTERNATIONAL DAY FOR THE ERADICATION OF POVERTY

Various non-government organizations and community charities support the Day for the Eradication of Poverty by actively calling for country leaders and governments to make the fight against poverty a central part of foreign policy. Other activities may include signing “Call to action” petitions, organizing concerts and cultural events, and holding interfaith gatherings that may include a moment of silence.

In December 1995, the UN General Assembly proclaimed the First United Nations Decade for the Eradication of Poverty (1997–2006), following the Copenhagen Social Summit. At the Millennium Summit in 2000, world leaders committed themselves to cutting by half the number of people living in extreme poverty by the year 2015.

Let’s come together and eradicate poverty… this is one of the missions of KEDI.

Join KEDI today and have a better life. COMPENSATION PLAN