WORLD RABIES DAY: SHARE THE MESSAGE, SAVE A LIFE 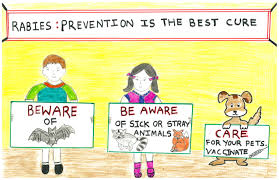 WORLD RABIES DAY: SHARE THE MESSAGE, SAVE A LIFE

World Rabies Day is the first and only global day of action and awareness for rabies prevention. It is an opportunity to unite as a community and for individuals, NGOs and governments to connect and share their work. It is celebrated annually to raise awareness about rabies prevention and to highlight progress in defeating this horrifying disease.

Created and coordinated annually by GARC, World Rabies Day, September 28th, focuses on rabies endemic countries, to increase community awareness of the disease and its prevention. World Rabies Day also raises the profile of national and local control programmes and acts as a springboard for year-round capacity building and awareness.

World Rabies Day is a great annual opportunity to increase awareness by holding an event, getting the media interested in your work and connecting with the wider rabies prevention community.

The World Rabies Day 2018 theme is Rabies: Share the message. Save a life.

Once an animal is showing clinical signs of infection, the disease is almost invariably fatal, and no treatment is effective.  Disease can often be prevented by immediate post-exposure vaccination.  Rabies can usually be prevented by vaccination, and vaccines are available for most domestic species.  Rabies vaccine was first developed in 1885 by Louis Pasteur and Emile Roux and successfully used to prevent disease in a boy who had been bitten by a rabid dog.

Standard treatment for people that have been exposed is an injection of immune globulin infiltrated in the region of the bite as well as intramuscularly, followed by a series of vaccinations.  A series of five vaccines are administered on days; 0, 3, 7, 14, and 28.  Those which have been previously vaccinated are not given the immune globulin injection, only the vaccinations.  The immune globulin consists of antibodies from blood donors given rabies vaccine.  The antibodies act as passive protection until the body’s own immune system can start to produce antibodies.

Any unvaccinated animal that has been exposed to rabies via bite or wound should be immediately euthanized.  If the owner of the animal is unwilling to allow euthanasia then the animal is to be kept in isolation if it is a small animal or else under close observation if it is a large animal.  The animal should be vaccinated one month before release.  Post-Exposure Prophylaxis as is used with people is not used in animals.

There are five components to surveillance and control. (Murphy et al. 1999)