THE 16 BEST FOODS TO CONTROL DIABETES 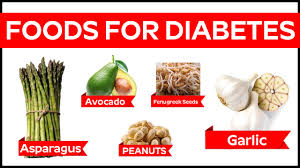 THE 16 BEST FOODS TO CONTROL DIABETES

Figuring out the best foods to eat when you have diabetes can be tough. The main goal is to keep blood sugar levels well-controlled. However, it’s also important to eat foods that help prevent diabetes complications like heart disease. Here are the 16 best foods for diabetics, both type 1 and type 2.

Fatty fish is one of the healthiest foods on the planet. Salmon, sardines, herring, anchovies and mackerel are great sources of the omega-3 fatty acids DHA and EPA, which have major benefits for heart health. Getting enough of these fats on a regular basis is especially important for diabetics, who have an increased risk of heart disease and stroke. DHA and EPA protect the cells that line your blood vessels, reduce markers of inflammation and improve the way your arteries function after eating. A number of observational studies suggest that people who eat fatty fish regularly have a lower risk of heart failure and are less likely to die from heart disease.

In studies, older men and women who consumed fatty fish 5–7 days per week for 8 weeks had significant reductions in triglycerides and inflammatory markers. Fish is also a great source of high-quality protein, which helps you feel full and increases your metabolic rate.

These antioxidants protect your eyes from macular degeneration and cataracts, which are common diabetes complications.

Cinnamon is a delicious spice with potent antioxidant activity. Several controlled studies have shown that cinnamon can lower blood sugar levels and improve insulin sensitivity. Long-term diabetes control is typically determined by measuring haemoglobin A1c, which reflects your average blood sugar level over 2–3 months.  In one study, type 2 diabetes patients who took cinnamon for 90 days had more than a double reduction in hemoglobin A1c, compared those who only received standard care.

A recent analysis of 10 studies found that cinnamon may also lower cholesterol and triglyceride levels. However, a few studies have failed to show that cinnamon benefits blood sugar or cholesterol levels, including one on adolescents with type 1 diabetes. Furthermore, you should limit your intake of cassia cinnamon — the type found in most grocery stores — to less than 1 teaspoon per day. It contains coumarin, which is linked to health problems at higher doses. On the other hand, ceylon (“true”) cinnamon contains much less coumarin.

Eggs provide amazing health benefits. In fact, they’re one of the best foods for keeping you full for hours. Regular egg consumption may also reduce your heart disease risk in several ways. Eggs decrease inflammation, improve insulin sensitivity, increase your “good” HDL cholesterol levels and modify the size and shape of your “bad” LDL cholesterol. In one study, people with type 2 diabetes who consumed 2 eggs daily as part of a high-protein diet had improvements in cholesterol and blood sugar levels.

In addition, eggs are one of the best sources of lutein and zeaxanthin, antioxidants that protect the eyes from disease. Just be sure to eat whole eggs. The benefits of eggs are primarily due to nutrients found in the yolk rather than the white.

Chia seeds are a wonderful food for people with diabetes. They’re extremely high in fiber, yet low in digestible carbs. In fact, 11 of the 12 grams of carbs in a 28-gram (1-oz) serving of chia seeds are fiber, which doesn’t raise blood sugar. The viscous fiber in chia seeds can actually lower your blood sugar levels by slowing down the rate at which food moves through your gut and is absorbed.

Chia seeds may help you achieve a healthy weight because fiber reduces hunger and makes you feel full. In addition, fiber can decrease the amount of calories you absorb from other foods eaten at the same meal. Additionally, chia seeds have been shown to reduce blood pressure and inflammatory markers.

Turmeric is a spice with powerful health benefits. Its active ingredient, curcumin, can lower inflammation and blood sugar levels, while reducing heart disease risk. What’s more, curcumin appears to benefit kidney health in diabetics. This is important, as diabetes is one of the leading causes of kidney disease. Unfortunately, curcumin isn’t absorbed that well on its own. Be sure to consume turmeric with piperine (found in black pepper) in order to boost absorption by as much as 2,000%.

Greek yogurt is a great dairy choice for diabetics. It’s been shown to improve blood sugar control and reduce heart disease risk, perhaps partly due to the probiotics it contains. Studies have found that yogurt and other dairy foods may lead to weight loss and improved body composition in people with type 2 diabetes. It’s believed that dairy’s high calcium and conjugated linolic acid (CLA) content may play a role.

What’s more, Greek yogurt contains only 6–8 grams of carbs per serving, which is lower than conventional yogurt. It’s also higher in protein, which promotes weight loss by reducing appetite and decreasing calorie intake.

Nuts are delicious and nutritious. All types of nuts contain fiber and are low in digestible carbs, although some have more than others.

Here are the amounts of digestible carbs per 1-oz (28-gram) serving of nuts:

Research on a variety of different nuts has shown that regular consumption may reduce inflammation and lower blood sugar, HbA1c and LDL levels.

In one study, people with diabetes who included 30 grams of walnuts in their daily diet for one year lost weight, had improvements in body composition and experienced a significant reduction in insulin levels. This finding is important because people with type 2 diabetes often have elevated levels of insulin, which are linked to obesity.

In addition, some researchers believe chronically high insulin levels increase the risk of other serious diseases, such as cancer and Alzheimer’s disease.

Broccoli is one of the most nutritious vegetables around. A half cup of cooked broccoli contains only 27 calories and 3 grams of digestible carbs, along with important nutrients like vitamin C and magnesium. Studies in diabetics have found that broccoli may help lower insulin levels and protect cells from harmful free radicals produced during metabolism. What’s more, broccoli is another good source of lutein and zeaxanthin. These important antioxidants help prevent eye diseases.

Extra-virgin olive oil is extremely beneficial for heart health. It contains oleic acid, a type of monounsaturated fat that has been shown to improve triglycerides and HDL, which are often at unhealthy levels in type 2 diabetes. It may also increase the fullness hormone GLP-1. In a large analysis of 32 studies looking at different types of fat, olive oil was the only one shown to reduce heart disease risk. Olive oil also contains antioxidants called polyphenols. They reduce inflammation, protect the cells lining your blood vessels, keep your LDL cholesterol from becoming damaged by oxidation and decrease blood pressure.

Flaxseeds are an incredibly healthy food. A portion of their insoluble fiber is made up of lignans, which can decrease heart disease risk and improve blood sugar control. In one study, people with type 2 diabetes who took flaxseed lignans for 12 weeks had a significant improvement in hemoglobin A1c. Another study suggested that flaxseeds may lower the risk of strokes and potentially reduce the dosage of medication needed to prevent blood clots.

Flaxseeds are very high in viscous fiber, which improves gut health, insulin sensitivity and feelings of fullness. Your body can’t absorb whole flaxseeds, so purchase ground seeds or grind them yourself. It’s also important to keep flaxseeds tightly covered in the refrigerator to prevent them from going rancid.

Apple cider vinegar has many health benefits. Although it’s made from apples, the sugar in the fruit is fermented into acetic acid, and the resulting product contains less than 1 gram of carbs per tablespoon. Apple cider vinegar has been shown to improve insulin sensitivity and lower fasting blood sugar levels. It may also reduce blood sugar response by as much as 20% when consumed with meals containing carbs.

In one study, people with poorly controlled diabetes had a 6% reduction in fasting blood sugar when they took 2 tablespoons of apple cider vinegar before bed. Apple cider vinegar may also slow stomach emptying and keep you feeling full.  However, this can be a problem for people who have gastroparesis, a condition of delayed stomach emptying that is common in diabetes, particularly type 1. To incorporate apple cider vinegar into your diet, begin with 1 teaspoon mixed in a glass of water each day. Increase to a maximum of 2 tablespoons per day.

Strawberries are one of the most nutritious fruits you can eat. They’re high in antioxidants known as anthocyanins, which give them their red color. Anthocyanins have been shown to reduce cholesterol and insulin levels after a meal. They also improve blood sugar and heart disease risk factors in type 2 diabetes. A one-cup serving of strawberries contains 49 calories and 11 grams of carbs, three of which are fiber.

This serving also provides more than 100% of the RDI for vitamin C, which provides additional anti-inflammatory benefits for heart health.

Garlic is a delicious herb with impressive health benefits. Several studies have shown it can reduce inflammation, blood sugar and LDL cholesterol in people with type 2 diabetes. It may also be very effective at reducing blood pressure.

In one study, people with uncontrolled high blood pressure who took aged garlic for 12 weeks averaged a 10-point decrease in blood pressure. One clove of raw garlic contains only 4 calories and 1 gram of carbs.

Squash is one of the healthiest vegetables around. Winter varieties have a hard shell and include acorn, pumpkin and butternut. Summer squash has a soft peel that can be eaten. The most common types are zucchini and Italian squash. Like most vegetables, squash contains beneficial antioxidants. Many types of winter squash are high in lutein and zeaxanthin, which protect against cataracts and macular degeneration.

Animal studies using squash extract have also reported reductions in obesity and insulin levels. Although there’s very little research on humans, one study found that people with type 2 diabetes who took an extract of the winter squash Cucurbita ficifolia experienced a significant decrease in blood sugar levels. However, winter squash is higher in carbs than summer squash.

Shirataki noodles are wonderful for diabetes and weight control. These noodles are high in the fiber glucomannan, which is extracted from konjac root. This plant is grown in Japan and processed into the shape of noodles or rice known as shirataki. Glucomannan is a type of viscous fiber, which makes you feel full and satisfied. It also lowers levels of the “hunger hormone” ghrelin. What’s more, it’s been shown to reduce blood sugar levels after eating and improve heart disease risk factors in people with diabetes and metabolic syndrome. A 3.5-oz (100-gram) serving of shirataki noodles also contains less than one gram of digestible carbs and just two calories per serving.

However, these noodles are typically packaged with a liquid that has a fishy odor and you need to rinse them very well before use. Then, to ensure a noodle-like texture, cook the noodles for several minutes in a skillet over high heat without added fat.