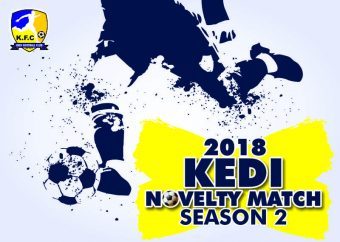 The second season of KEDI Healthcare Novelty Match 2018 contest held on 22nd September, 2018 at Lagos Campos Memorial Mini Stadium, Igbosere was certainly one to remember, with both teams serving a 6 goal thriller which brought the spectators to a rapturous ovation! Despite going behind 3 – 0 early on in the match, the Staff team replied with two quick goals to create a panic in the opposing team, however with so many chances at both ends the game could easily have gone either way but the match eventually ended 4 – 2 in favour of the Distributors who went home with the trophy. Steven Amih and Sodiq Babatunde were the MVP while Peter Adegoke who racked up an impressive 2 goal hauls for the staff team, deservedly won the highest goal scorer’s award. The Gold sponsors’ for the novelty match STANBIC IBTC BANK were fully represented on the day.

It was a glorious, cold and rainy day in Lagos as the match kicked off, with the staff team wearing the Blue and Yellow kit and the Distributor’s team sporting the Blue and white kit.

The Distributor’s team started brightly with Kolawole David going close after a surging run into the left side of the box, however the staff centre half Peter Odibo did well to cut out his effort. The lively looking Destiny Oroyovwen went close soon afterwards when he ran through a gap in the defense; however staff keeper Kingsley Pelemoh stood up well and pawed the ball away.

Joseph Agada (star 5 distributor) was looking dangerous and with just 10mins gone he opened the scoring for the Distributor’s team. The Distributors were looking confident and they doubled their lead on 15mins, Samusa Ibrahim (star 4 distributor) raced onto a through ball and after just managing to get to the bouncing ball ahead of the keeper he side footed the ball into the net (2-0). The third goal came in, in quick succession as Kolawole David (star 7 distributor) hit a long shot from outside the eighteen yard box which beat the goalkeeper to make it 3 nil in favour of the distributors.

The Staff team responded well immediately through a converted penalty kick by Captain Peter Adegoke to reduce the goal tally. Charles Nweke raced from left and was brought down for a free kick which the speedy striker – Peter Adegoke slotted into the left side of the net to make it 3 – 2.

The match was wide open at this stage and the staff team went close soon after when Sodiq Babatunde latched onto a clever through ball from Gift Ukoba, however his angled effort bounced off the far post and away to safety. Despite the chances created by the staff team, the distributor’s team defense stood their ground.

With a few minutes to go until half-time the distributor’s team almost increased their lead, however the shot on the run drifted just wide of the far post. It was end to end stuff now and at the other end Sunny almost squared the tie, however the goal keeper did well to save his well struck effort with his legs.

That was the final chance of the half and soon afterwards the ref’s whistle brought to an end an incredible end to end opening period! The Distributors team were ahead 3 – 2, but with a host of chances at both ends it was anybody’s guess as to who would come out on top by the end of the 90mins.

The staff team certainly started the second half in a determined fashion and their Captain Peter Adegoke had an early chance, however his near post effort was well saved by the goal keeper.

The pacy partnership of Joseph Agada and Kolawole David continued to cause the staff defence problems and the distributors looked a constant threat in attack, however the staff defence marshaled by Charles Nweke and Gbenga Adebayo were well organised and held out well. Steven Amih was also proving to be a danger and a handful for the staff defenders.

Felix Adedoyin the new goal keeper who came in for Kingsley Pelemoh was certainly being kept busy and soon after he did very well to block an effort from Steven Amih who at this time has become a constant threat. With fatigue setting in now, the skillful Steven Amih won a penalty but the kick was eventually saved by the goal keeper.

The distributor’s team continued to press for the all-important 4th goal and with just 5mins remaining! Steven Amih who has been a constant threat slotted in a close range effort to beat goal keeper Felix Adedoyin for the fourth goal in favour of the distributors.

The category of the award goes thus;

The trophy valued at N200,000.00 was lifted by the team’s captain Alani Abiodun (star 7 distributor)

The vote of thanks was given by Ms Doris Bourmel as food and drinks were made available to all distributors and staff present with blast of songs to mark the end of the event.

Huge thanks again to KEDI management and our sponsors VITANATURE and STANBIC IBTC BANK for the successful hosting of this year’s Novelty match.

KEDI!!!! The partner we trust.